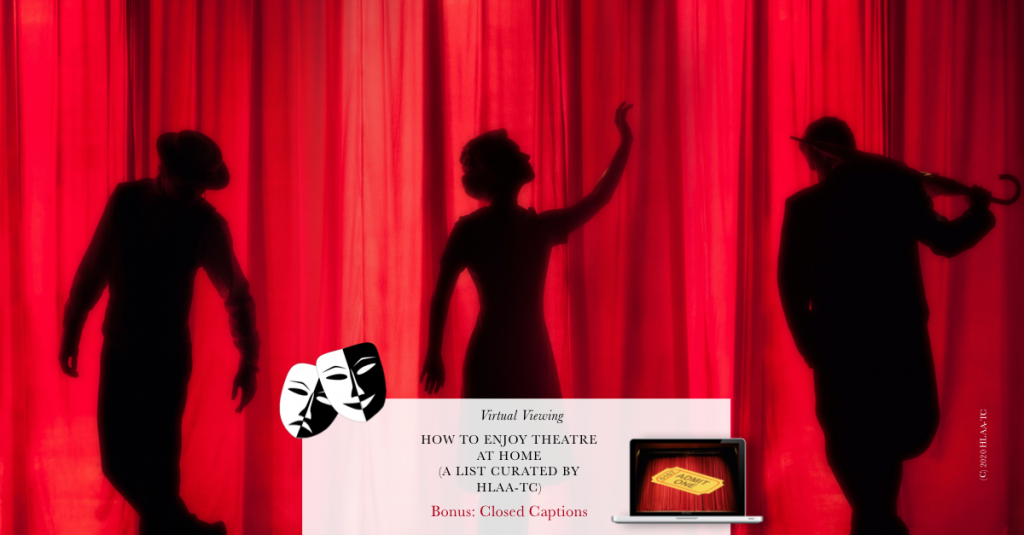 As the concern of COVID-19 still dominates our lives more and more aspects of daily life are becoming virtual.  Now areas of life that were more “special events” or occasional activities are also becoming virtual. In that latter category is theatre, live performances, and cultural events. Broadway (in New York City), the West End (London, England) and elsewhere (locally, etc.) are offering online/virtual theatre experiences. In this blog post, we’ll review several ways to view theatre online. The bonus for those of us with hearing loss or deafness is that it’s usually much easier to have these performances closed-captioned versus regular live theatre.

CBS News posted this very comprehensive article on how to and where to watch virtual theatre and performing arts performances. There are links to live performances and places to watch filmed theatre performances (like PBS’ Great Performances).

Since Broadway has been temporarily shut down, there are virtual events, fundraisers and readings on a daily basis. Here is a Playbill post with a link to a calendar of virtual theatre performances. Note: Since a lot of these performances are on platforms that don’t usually have captions (like Facebook Live and Instagram Live) please be aware of that.

Much like Broadway is organizing virtually to keep the lights on in their theatres during this mandatory shut down, London’s West End theatre industry is doing the same. Virtually London: post on London theatre performances going virtual.

Guthrie Theatre: Virtual fundraiser with live performances on August 1, 2020, at 7:00 (CST). You must register for this event but registration is free.

The History Theatre: Virtual performance of their new original musical (based on an independent film) “Sweetland: The Musical.” Once tickets are purchased (they recommend buying a ticket for every viewer much like you’d buy a ticket for every person attending a live performance) you will receive a link to stream and the link will be active October 9 – 22, 2020.

I would be remiss if I didn’t mention Disney+ (Disney’s streaming platform) premiered a filmed performance of the Broadway smash hit “Hamilton.” It is a filmed production of the original Broadway cast performing the musical. You must pay for at least a monthly subscription of Disney+ to see it (no free trial periods available any longer). A month subscription is $6.99/month and $69.99/year and you can watch all of the offerings on Disney+ during that time. Bonus in watching a filmed live performance like this one is that it’s closed captioned.

Make sure you’re subscribed to this blog (by signing up on our website). As always, if you have something you would like to see featured in an upcoming blog, please comment on this blog post or connect with us on Facebook or LinkedIn. Stay safe. Stay healthy. And stay informed.